Skip to content
HomeBeautyI Got Waist-Length Hair Extensions, and It Was Totally Worth the Ridiculous Upkeep 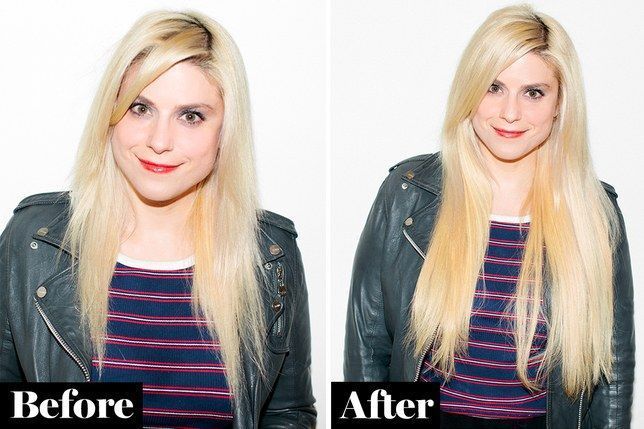 When I was a kid, I had super long hair, much like what I’d imagine a mermaid princess having. Only I didn’t know I had glorious hair…I just had it. Looking back, that hair also required me to spend hours in front of the TV so my mom could brush out my “snarls” while everyone watched Days of Our Lives.

Decades later, though, those mermaid hair days are long gone. My hair’s been chopped, dyed, fried, you name it. But I’ve also spent the last year being fully obsessed with Scarlett O’Connor on Nashville and her “how is that real?” long hair. (Before the pixie, that is.) It’s because of her I decided I was ready for butt-length hair.

Unfortunately, as anyone who’s ever tried to grow their hair knows, it takes basically five years to see a real difference. Even then you still might not get there because your hair has to be healthy enough to not break off midway. So I did what people desperate to have their dream hair now do, even if it means saving my money for forever to do it. I booked an appointment to get tape-in hair extensions.

First of all, let me tell you that the extensions I got did not end up being fully butt length—as in past my butt so I can sit on it like a faux fur chair—despite my wanting them. This was largely because I’m a tall person. So tall, in fact, that the lovely RPZL salon I went to in Manhattan didn’t even sell extensions that went all the way past my torso and down to my butt. Also, I’m told no one really comes in asking for hair they could sit on, which makes no sense to me because that sounds so fun. Still, the extensions they were able to give me were 22 inches long. That’s nearly two feet of hair.

Since I’d had extensions before, the hairstylist’s telling me what to expect (it’s going to tangle easily, you have to brush it like it’s literally your job to brush it and it will take freaking forever, it’s going to feel heavy as hell) was a little like, “Yeah, yeah, whatever.” All of her “You might get a headache” warnings fell on deaf ears (until I felt the weight of the finished product, and my eyes began to water and my head ached most of the night).

The process of getting tape-in extensions took more than four very long hours and cost $1,250 because that’s truly a f–k-ton of hair. But other than that, it wasn’t too bad. Yeah, I spent most of that time checking my phone and wishing I could fall asleep, but once all was said and done, I was flipped around to reveal my hair that looked as close as it possibly could to looking like my beloved season one Scarlett O’Connor.

I felt 90 times more majestic than usual, like when you get a blowout and realize, “Oh shit! So this is how I’d look if I had a live-in stylist.” I got on the train feeling too cool…until I kept getting my hair caught in my coat because it took a full minute to pull it out. And then it somehow got caught in the subway doors. Multiple times. So I guess it was safer in my coat.

I ended up not washing it as often as I would my non-extension hair and instead did constant conditioning treatments on the ends to keep it moisturized. Sadly I didn’t get to do crazy, complex Tumblr braids every day because I’m not that skilled and also was very sleepy. I blame the weight of the hair for my sleepiness; although I know that’s a lie.

In terms of daily styling, I did a lot of “Here are two braids, I’m exhausted” because I can barely manage my own blowouts, let alone blowouts with waist-length hair. I had my friend give me one, and it seriously took hours. I did get a lot of compliments, though. I’d always respond with, “Oh, it’s fake as hell,” which I don’t think you’re supposed to do. The correct response is probably, “Thanks! I’ve just been eating a lot of kale which has folic acid which makes your hair grow!”

All in all, I landed where I knew I would on the issue: I love ridiculously long hair so much. I feel weirdly protected by it, kind of like a long, strange security blanket that I have to put in a braid at night and brush all the time otherwise it gets tangled. I’m sure the protection aspect comes from this idea that we’re all supposed to be long-haired princesses, draped in our own boob-covering mermaid hair, which is, of course, bullshit because you can be a princess who is bald and gorgeous. (Or one with short hair, as Clare Bowen, a.k.a. Scarlett, reminded us all when she cut hers.) But since I’ve been obsessed with witch-goddess hair for so long, finally having it has felt comforting—and I’m not ashamed to say it.

Sorry, real hair, but I have seen a better (albeit wildly more expensive and difficult to even begin to justify) life. Hair extensions for life. I now need my hair to wrap around me like a quilt or I’m not interested.

Lane Moore is a writer, comedian, actor, and musician. She is the creator of the hit live comedy show Tinder Live, which is currently touring colleges and comedy venues nationwide. You can follow her on Twitter and Instagram.