Skip to content
HomeEntertainment19 Unforgettable Moments From the 2017 Emmy Awards 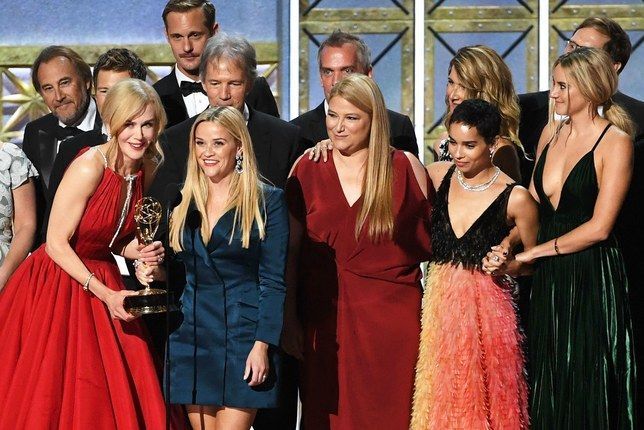 There was a lot of buzz going into tonight’s Emmy Awards—with Stephen Colbert hosting the ceremony and a star-studded nominees list, things were bound to happen. The Best Actress in a Limited Series contenders alone were a who’s-who of Oscar winners. (Spoiler alert: Nicole Kidman won.) Plus, the excitement around the surplus of quality TV shows in general gave some extra sparkle to tonight’s Emmys.

That being said, it was still an awards show, which means the running time was about an hour too long, and there were a few self-indulgent, eye-roll moments we could’ve done without. Overall, though, the show was a great time. So here are the best and worst moments from the 2017 Emmy Awards.

Issa Rae saying she’s rooting for all the Black nominees.

He sang about how the world seems less like a dumpster fire when you watch good television. And, well, he’s right. Our only complaint? The jingle reminded us that Bryan, not Peter, won this season of The Bachelorette.

It was brisk and funny—living proof that hosting gigs are best left up to the professionals. The only slumps were when he cracked a few thin jokes about the Hurricane Harvey and Irma crises and the Sean Spicer cameo—but we’ll get to that.

Her performance in Big Little Lies was one of the highlights in entertainment this year—period. She deserved to win, and her speech thanking the “fierce” tribe of women on the show was A-plus.

Again, he was a deserving candidate, so it’s amazing he won. (He also took home the prize for Outstanding Lead Actor in a Comedy Series.)

Honestly, we’re not deserving of her.

Dolly Parton, Jane Fonda, and Lily Tomlin having a 9 to 5 reunion after 30-plus years.

They joked about Donald Trump and vibrators. It was a moment.

Alec Baldwin’s epic Trump diss during his speech for Outstanding Supporting Actor in a Comedy Series.

“I suppose I should say, at long last, Mr. President, here is your Emmy,” he said, referring to the fact Trump was nominated several times for The Apprentice but never won.

RuPaul literally playing an Emmy during a sketch with Colbert.

Where is RuPaul’s Emmy for being Emmy?

Issa Rae and Riz Ahmed presenting an award together.

Retweet if you're totally here for a Riz Ahmed-Issa Rae project #Emmys pic.twitter.com/pzvxrwJepw

The fact that this show was perhaps the most diverse Emmys ceremony to date.

Queer and people of color representation was stronger than ever before—both in the winners and the audience. Hopefully this is a sign of where the industry is going.

.@IssaRae goes for a spin on the red carpet. #Emmys pic.twitter.com/HEpMqRVRJK

Lena Waithe becoming the first Black woman to win an Emmy for Outstanding Writing in a Comedy Series (Master of None).

“I see each and everyone one of you,” she said about the queer community during her speech. “The things that make us different: those are our superpowers. Everyday when you walked out the door, put on your imaginary cape and go out there and conquer the world—because the world would not be as beautiful as it is if we weren’t in it.”

This was the most competitive category of the night, and Kidman got very emotional during her speech.

"With this we shine a light on domestic abuse .. it exists far more than we allow ourselves to know." – Nicole Kidman, #Emmys winner. pic.twitter.com/1fs5WJZ1qs

Riz Ahmed winning winning Outstanding Lead Actor in a Limited Series for The Night Of.

It’s incredible that this feminist show received so much love tonight. Progress!

Kidman and Reese Witherspoon’s plea for more roles for women.

“Bring women to the front of their own stories,” Witherspoon said while accepting the award for Outstanding Limited Series for Big Little Lies. “Make them the heroes of their own stories.” Kidman added, “This is a friendship that then created opportunities out of our frustration because we weren’t getting offered great roles. So now, more great roles for women, please.” Damn straight.

So that just happened… #Emmys pic.twitter.com/gFnZRjVXRD

Parton making a joke about her large breasts.

It’s so problematic that she still feels the need to do this. She’s Dolly Effing Parton! Evan Fonda rolled her eyes at this.

Seth McFarlane reading off nominees in Family Guy voices might be the only thing tonight more obnoxious than having both Sheldons on stage.

Click here to check out more of our Emmy Awards 2017 coverage.