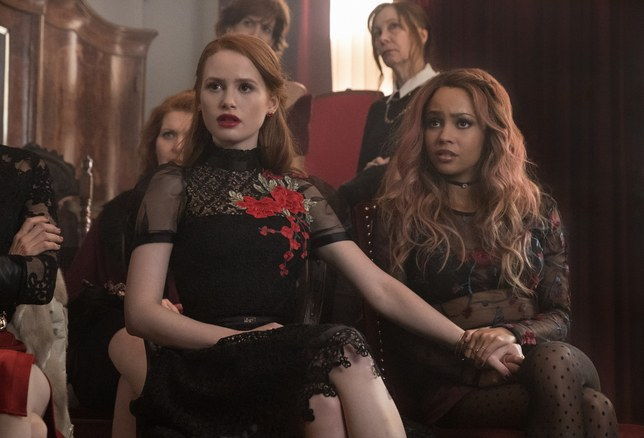 Tonight’s Riverdale was out of control. Veronica’s gone rogue. Dark Betty’s in full force. Jughead chained himself to a school. I honestly can’t, but here’s what happened for those of you who can. Spoilers ahead.

We open things up with a bombshell: Hal isn’t Chic’s father, but Alice is his mother. This news sends Betty and her ponytail into a tailspin. For some reason Alice won’t tell her who Chic’s father actually is, so I’m calling it: It’s the Black Hood.

However, none of this is as bonkers as the fact that Andy Freaking Cohen shows up to endorse his “great friend” Hermione Lodge’s candidacy for mayor. (Remember: The Lodges are turning Southside High into a prison, Fred dropped out of the race, yada, yada.) Hermione would make an excellent Real Housewife, TBH. Even Bethenny Frankel would be terrified of her.

Literally everyone’s pissed about this prison and about Hermione running for mayor. Fred wants to sever all ties with Lodge Industries because of it. Jughead calls Veronica “Olivia Pope” for giving a positive interview to the Riverdale Register. (He’s so annoying, even if he’s right.) He’s apparently going on a “hunger strike” to protest Southside High closing. I’m not here to shade his activism, but the fact he’ll be even grouchier if he’s hungry.

Hiram responds to Jughead’s strike by accelerating the Southside High demolition to this week, which is so petty. He has Archie tell Jughead this news, because, remember, Archie did that weird blood pact that swore his allegiance with the Lodges. They have a heated convo about it, and I think the anger’s mostly coming from the fact Jughead’s starving. Enraged, he later tries to get the Serpents at Riverdale High to go to war against Hiram too. Toni doesn’t seem too interested, though, probably because she’s too busy thinking about Cheryl Blossom. Cheryl > Everything.

No one’s more pissed than Ethel Muggs, though, who throws a milkshake in Veronica’s face to show how mad she is about the prison. (Remember when this used to happen on Glee all the time?) The whole school’s giving Veronica shit about this, but Hermione tells her to keep a lid on her temper.

But that goes out the window when Douche Lord Reggie starts talking crap about Hiram—so Veronica sucker-punches him in the face, knocking him out cold. Betty’s shook. Veronica’s shook. I’m shook watching it! Veronica’s parents tell her to keep her head down, again, but she ignores them and decides to run for student body president against Reggie. I love that she’s just going rogue! Fuck it all, Veronica! She asks Betty to be her running mate, which is a cute but boring choice.

Meanwhile, over at Thistle House, Cheryl’s shook for other reasons. Because Clifford’s long-lost brother Claudius is back in town, and Cheryl overheard him and Penelope conspiring to do some sketchy shit, she now thinks they’re going to try to kill her and Nana Rose. That would be devastating but also the Whatever Happened to Baby Jane? drama that I live for.

Also what I’m living for: Cheryl throwing a slumber party at Thistle House to celebrate her maybe-girlfriend Toni Topaz joining the Riverdale Vixens. They start their party by combing each other’s hair like the Dua Lipa’s “New Rules” video, so naturally I’m squealing. Then Cheryl tells the attendees (Toni, Josie, Betty, and Veronica) that she’s afraid Claudius and her mother are plotting her demise. This is all so gothic and campy! Betty uses this opportunity to talk about Chic because of course she does.

Later that night, Toni and Cheryl are in the same bed, about to kiss, when they hear a crash coming from downstairs. It’s Nana Rose. She fell down the stairs! Was this an accident?! Did Penelope do this?! Like I said: Baby Jane!

Of course we’re pivoting from this storyline to indulge Archie, whose mother, Mary (Molly Ringwald), just popped in for a surprise visit. She’s there to help Fred legally sever ties with the Lodges or some nonsense. I’m already bored and want to get back to Cheryl’s potentially murderous uncle and crazy mom. Mary’s pissed because Archie keeps defending Hiram in front of her and Fred.

Ethel’s pissed too. She and Veronica have a tense convo at school, which ends with Veronica promising Ethel’s dad a job offer from Hiram…a promise she clearly can’t keep. In positive news, though, Veronica tells Josie she can get her on Andy Cohen’s show Watch What Happens Live if she’ll endorse her campaign. Josie agrees. I love that this is a plot point.

But then shit hits the fan. While Josie and Veronica are performing at Veronica’s silly campaign rally, Ethel shows up with receipts that prove Veronica knew Hiram was turning Southside High into a prison. It turns out Josie fed this information to Ethel behind Veronica’s back. Drama, drama, drama. Betty’s understandably upset Veronica kept this secret from her, and drops out of their campaign.

Oooh, we’re finally back to some good stuff. Betty comes home to find Kevin baking cookies with Chic and flirting. Apparently, Kevin told him all about how he got caught up in Betty’s catfishing scheme, so, in other words, Kevin sold Betty out. When Kevin leaves, Betty tells Chic to leave her friends alone “or else.” They exchange some creepy dialogue before Betty delivers the most delicious threatening sentence (see below). She then goes to his room late at night and waves a lighter in his face to wake him up and then threatens him again. I love Dark Betty!

“You know nothing about my darkness, but you will” —Betty

Chic retaliates by telling Alice all of this and spilling the beans about the black wig Betty wears when she and Jughead have sex. How he knows that information is unknown and very, very strange (i.e.: it’s Chic AF). Then, Alice lets it slip that she’s hooked up with F.P., so it’s possible he’s Chic’s father. Did we just take a turn into Lily van der Woodsen/Rufus Humphrey territory?

Later, Betty and Chic attempt to bury the hatchet, but that doesn’t go according to plan: Chic essentially threatens to call the police and frame Betty for the murder he committed. Awww, all this sibling love is so tender.

“You think I’m the only one who can scare people by being crazy?” — Betty

Also threatening, though: Jughead, who’s chained himself to Southside High to protest it being knocked down. Other Serpents are doing it too. Archie thinks this is a crazy idea, and he gets into a fight about it with his parents, in which he basically defends Hiram Lodge and leaves them out to dry. Wow, he’s really moving up on the asshole scale this episode, isn’t he?

Hiram convinces Archie to ask a bunch of his friends to remove Jughead and the Serpents by force. Archie agrees, but only if Hiram will release his father from his commitments to Lodge Industries. Jughead decides to run for Riverdale student body president in light of all of this, and asks Betty to be his running mate. She agrees, and asks Jughead if she can stay with him in light of Chic’s creepiness. Fred’s now running for mayor again, too…against Hermione.

We end with the Blossom storyline. Cheryl’s convinced it was her mother who poisoned her Nana and pushed her down the stairs. She’s probably right, but Penelope uses this as an excuse to say Cheryl is “mad” and send her to the Sisters of Quiet Mercy. Oh my God: These nuns are probably going to perform some psycho gay conversion therapy on her. SOS! Don’t hurt my queen!