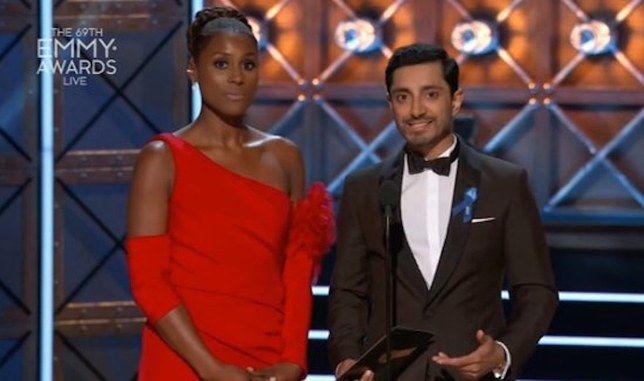 The 2017 Emmy Awards is shaping up to be a great night: Laura Dern won Outstanding Supporting Actress in a Limited Series for Big Little Lies, Donald Glover took home a directing nod for Atlanta, and Sean Spicer popped out on stage—with his White House podium—and left everyone, especially Melissa McCarthy, shook.

But one of the best parts of the evening, so far, was the life-giving presenter pairing that was Issa Rae and Riz Ahmed. Yes, the Insecure and The Night Of stars took the stage together to present the award for Outstanding Directing in a Comedy Series, and the Internet subsequently freaked out about it. Why? The two of them, together, created so much hotness that it literally set televisions across America on fire. OK, not really, but you get the idea: Their joint beauty was simply a sight to behold. Looking at them was like staring directly into the sun.

Of course, everyone is shipping Ahmed and Rae now—both professionally and personally. Just imagine what a rom-com would look like with these two gorgeous humans in the leading roles? Or what about a horror movie where Ahmed and Rae use their sexiness to defeat an army of ghosts? At the very least, Ahmed needs to join the cast of Insecure and play Rae’s love interest for a few seasons. Twitter wants it, and, as that Lupita Nyong’o/Rihanna heist movie proves, that’s enough for Hollywood to start listening.

Check out just a few of the fan responses, below:

Retweet if you're totally here for a Riz Ahmed-Issa Rae project #Emmys pic.twitter.com/pzvxrwJepw

Now I want a movie where Issa Rae and Riz Ahmed are in love. Can we please have that? Thank you. – J #Emmys

Holy God Issa Rae and Riz Ahmed. I'm not even sure where my fantasies are landing.

Who will look at me the way Riz looks at Issa

They bring Issa and Riz out at the same time trying to give me a heart attack!! #Emmys

Would love for Issa Rae and Riz Ahmed to be on my screen together a lot more, thx. #Emmys

How about a drama or rom-com with Issa Rae and Riz Ahmed as the leads? #Emmys #BitchFlicks pic.twitter.com/srMf2jsvzM

Click here for more of our coverage of the 2017 Emmy Awards.

Insecure‘s Issa Rae on Defining Her Own Blackness: “Being Black Is Not Just One Thing”

Issa Rae and Melina Matsoukas of Insecure on Race, Sex, and Female Friendship