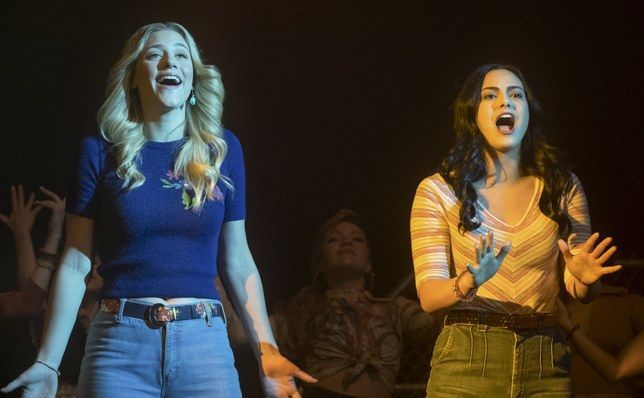 It’s been a while, Riverdale—three weeks, specifically—but you’ve finally returned with the event fans have been waiting for: the musical episode. And, my God, you didn’t disappoint. There was singing; there was dancing; there was bloodshed. How the hell is this show going to top itself? That’s a question for later, but for now, here’s what went down on tonight’s episode:

Things kick off with shirtless Archie doing pushups and Cheryl singing, so I can already tell this is going to be iconic. Kevin’s directing the school’s production of Carrie: The Musical, which is great because hopefully that means he gets a ton of screen time. Not great, though, is that he asked Jughead to film a behind-the-scenes documentary about the play. Behind-the-scenes better mean his beanie is behind Cheryl at all times, TBH.

Archie’s somehow keeping the car Mr. Lodge got him a secret from his father, Fred, who’s desperate to spend time with him—so desperate that he volunteers his construction company to build sets for the musical. Interspersed through all of this drama are shots of Archie singing, which, LOL, but I’m living for it.

The first rehearsal for Carrie is awkward. Alice Cooper is playing Carrie’s mother—a tidbit she somehow forgot to mention to Betty. That awful guy Chuck, who made the little black book with all his “escapades” in season one, is in the play as well, which has everyone pissed. (He’s trying to “reform his image.” Ugh.) However, does any of this matter so long as Cheryl stays front and center as Carrie White? (Answer: No.)

“After the fires I’ve walked through, Kevin, the world needs to see me up on that stage!” —Cheryl, future Tony winner

Everyone’s still mad at Veronica for keeping her parents’ plans for Riverdale a secret, and that animosity is seeping into this first rehearsal. Betty’s pouting and saying that Veronica is just as mean as the character she’s playing (Carrie’s antagonist, Chris). Archie’s playing dumb, and Jughead’s filming all of this, but we barely see him. It’s fantastic.

Also fantastic: Cheryl just breaking out into song randomly to prove to everyone she has the pipes to play Carrie White. This is my permanent aesthetic. But right after her song ends, a sandbag (???) falls from the ceiling and almost knocks her out, which means that someone—the Black Hood maybe?!—is trying to sabotage the show. And hurt people! Bah!

Yup, it’s definitely the Black Hood. Kevin receives a note from someone who claims to be the Black Hood demanding that the role of Carrie be re-cast. (OK, Phantom of the Opera.) Who is trying to deprive Cheryl of the spotlight she deserves?

Anyway, now we’re watching a musical number starring Betty and Veronica. There’s lots of hair flipping and hip-popping, so I’m here for it. I’m also screaming over pitch-corrected Archie. I love when Auto-Tune is used in any occasion ever! (Well, at least I think this is being pitch-corrected…)

“I will not succumb to thespian terrorism.” —Cheryl

Pivot to Hiram Lodge, menacingly talking about how he has to get Fred and Archie on the outs in order to derail Fred’s “family values” mayor campaign. Archie told Veronica his dad would be upset if he found out Hiram bought him a car (um, duh), so I’m predicting Hiram’s somehow going to rub that in Fred’s face. Straight dudes and their cars.

Of course Jughead and Betty put on their detective hats to find out who sent the threatening “Black Hood” letter. They flat-out accuse Ethel Muggs of doing it with no evidence other than the fact she wanted the role of Carrie. But Ethel denies this.

Also…Alice and F.P. are hooking up? Oh, right, she did stop by his trailer at the end of March 28th’s episode. She goes to the Pop’s Diner and calls him “handsome,” but he gives her the cold shoulder. Not sure I care about this storyline, but I do appreciate the Gossip Girl parallels.

Back at musical rehearsals, Josie and Cheryl sing a duet together, which is awkward because they’re on the outs. (Remember, Penelope Blossom made Josie think Cheryl was obsessed with her.) But their issues are solved with a simple, “I’m sorry” from Cheryl and some singing. They hug. It’s tender. Fire everyone and make Riverdale a two-woman show starring Cheryl and Josie.

Oh my God, now Veronica’s doing a solo number, and it’s phenom but suddenly derailed by Betty, who goes on a crazy mean tirade about how Veronica’s a terrible person. God, she was just trying to be loyal to her parents, Betty. Let her live! Direct all your negativity toward the Black Hood—or Jughead, who’s creepily filming all of this like Wes Bentley in American Beauty. Archie tells Betty to calm down, and then they sing together. I can’t take Archie singing seriously. Not with his guitar. Not in this musical. Not ever.

Oh, and I was right: Hiram does tell Fred about the car he bought Archie, and it causes a fight between father and son. Apparently, Fred wanted to go to the “old junkyard” and fix a car up with Archie, which might be the most heterosexual thing I’ve ever heard. Archie says Fred shouldn’t be mad at him because it’s “just a car.” Um, did I miss the episode where Archie won the lottery or something and cars are now disposable? What a spoiled (but hot) doof. Archie eventually comes to his senses, gives the car back to Hiram, and tells him to stop screwing with his and Fred’s relationship. Thank God. That Mark Consuelous is up to no good!

Over at Château Cooper, Alice is sad that Crazy Chic isn’t returning her calls…even though she kicked him out. Alice essentially feels like everyone is leaving her, which makes Betty feel like crap. As it should! Your mother is Mädchen Amick, Betty. Have some respect.

Betty ultimately convinces her father, Hal, to come home and ask for Alice to take him back. She accepts, and then they have a lengthy convo where it’s revealed Chic isn’t Hal’s son. OK, so this is shocking but also not shocking because fans have been saying this for months. What this means about Alice’s mild flirtation with F.P. is a mystery, though.

But who cares about this because the “Black Hood” sent another message to Kevin demanding the role of Carrie be re-cast. Cheryl’s pissed, but it turns out she can’t even fight this fight: Her monster mother Penelope shows up and says she’s not giving her parental approval to do the school musical. Midge Klump replaces her. If this means Cheryl’s done singing, then I’m turning this episode off (except not really—I have to finish my recap).

“I burned one house down. I’ll happily burn another.” —Cheryl

It’s the night of the musical. Everyone’s singing in their dressing rooms; meanwhile, Cheryl’s singing on her own, outside Thistle House, where she’s holding a bucket of…something. Is it gasoline? Is she going to set Thistle House on fire because Penelope banned her from the play? God, I hope.

OMG, NOPE. It’s not gasoline! It’s BLOOD. Cheryl literally doused herself in blood and is now wielding a gothic candlestick—all to threaten her mother to stop messing with her and Nana Rose. This is the greatest Riverdale scene of all time. Give Madelaine Petsch an Emmy immediately.

And there’s more drama: Jughead discovers cut-out magazines in Ethel’s dressing room, which is what the “Black Hood” used to send those threatening messages. However, Ethel still denies she had anything to do with those. As this is happening, Jughead walks in on Midge Klump and Kevin’s boy toy seemingly getting cozy, and minutes later Midge’s boyfriend, Moose, storms down the hallway pissed.

So…did Ethel send those letters? Or is it Chic, who randomly just showed up to opening night? Whoever it is, they’re actually the real deal because during Carrie: The Musical, a stage wall opens to reveal Midge Klump brutally stabbed dead alongside a note from the Black Hood saying he’s back. Holy shit! I just wanted a wholesome night of theater, and now there’s carnage.

Parting thoughts: Don’t kill Cheryl, and everything will be fine.