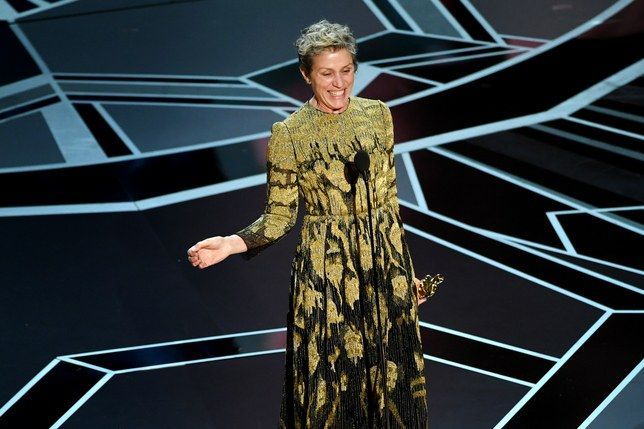 Two thousand seventeen was an excellent year for women in film, and this was represented in the nominees at the 2018 Oscars. Rachel Morrison became the first woman in history to score a nod for Best Cinematography (Mudbound). Greta Gerwig was nominated for Best Director (Lady Bird), the fifth woman to ever receive this honor. And Mary J. Blige was nominated for both Best Supporting Actress and Best Original Song. While we would have loved to see more women actually win tonight, their nominations alone are proof change is coming to Hollywood.

And Frances McDormand found a way to give all the female nominees some well-deserved shine tonight. During her acceptance speech for Best Actress in a Leading Role (Three Billboards Outside Ebbing, Missouri), McDormand asked them to stand for a moment so the audience could properly honor the women. “If I may be so honored to have all the female nominees in every category stand with me tonight,” she said, joking that if Meryl Streep did so, everyone would follow her lead.

She didn’t just mean her fellow nominees for Best Actress, either: She meant every woman who was nominated for an Oscar in the room. This ranged from Morrison in the cinematography category to the women nominated in Best Original Song, in addition to all the actresses and supporting actresses.

It was a powerful moment, but it also highlighted how there’s still an uneven divide between the male and female nominees. Hopefully, we’ll see even more improvements and change next year. Tonight was great, but we still have a long way to go.

“Look around, everybody…because we all have stories to tell and projects we need financed,” McDormand said as all the women stood up. “Don’t talk about it at the parties tonight, invite us into your office in a couple days, or you can come to ours, whatever suits you best, and we’ll tell you all about them.”

Watch a video of it for yourself, below:

Frances McDormand asks all the female nominees in every category to stand with her. "Look around, everybody…because we all have stories to tell and projects we need financed." https://t.co/lJd8920ucU #Oscars pic.twitter.com/pOLaWHatZK