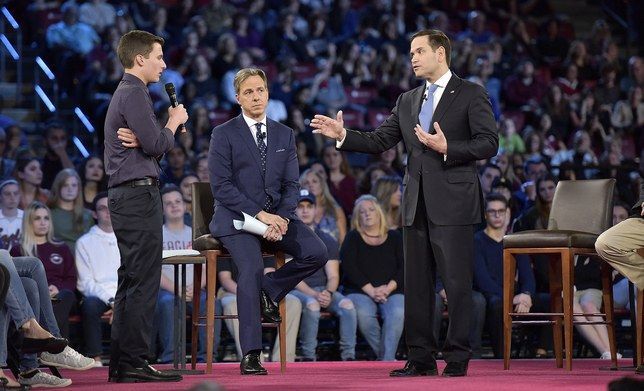 Emma Gonzalez. Cameron Kasky. Ryan Deitsch. If you hadn’t already committed their names to memory before Wednesday night’s live town hall on CNN, you must now. I truly believe these young people are leading the way to a new day in American politics—and it is a powerful sight to behold. Along with their classmates, including David Hogg and Sarah Chadwick, from Marjory Stoneman Douglas High School in Parkland, Florida, they are welcome new heroes and a model for all of us looking to enact political change in this midterm election year.

In just over a week since these young people were the survivors of a mass shooting that killed 17 of their classmates and teachers, they have risen up, organized, and become a legitimate political force. Their efforts came to a head last night during a CNN live town hall that allowed them to ask questions of both their elected officials, including Florida senators Marco Rubio (Republican) and Bill Nelson (Democrat), Congressman Ted Deutch (Democrat), and NRA spokesperson Dana Loesch, along with Broward County sheriff Scott Israel. The emotions in the room were understandably raw, and no matter which side of the debate you fall, it’s important that we as a country witnessed it—and that the public officials on that stage did too. The Parkland community, which also includes incredibly vocal parents and teachers, refuses to let this issue be swept aside in the normal cycle of American news, no matter how tragic that news might be.

Have we seen town halls before? Yes. There have been heated confrontations with politicians and political hopefuls through the years. But I cannot remember a moment in my lifetime when a senator or a congressperson was forced to face a constituent—some not old enough to vote, no less—who would not back down in front of a live audience and millions of viewers. And I hope it’s going to change everything going forward.

This interaction between Senator Rubio (who, by the way, deserves no extra credit in my book for showing up to talk to his constituents, a.k.a. his job) and Cameron Kasky brought me to my feet alone in my living room. Kasky wanted to know if Rubio will stop taking campaign contributions from the NRA and wanted nothing to do with the typical political sidestepping. He clearly and simply asked, “So Senator Rubio, can you tell me right now that you will not accept a single donation from the NRA in the future?” And when Rubio went on and on about people buying into his agenda and not the other way around, Kasky coolly and calmly rebutted, “Your agenda is protecting us, right?”

Ladies and Gentlemen, @cameron_kasky. This is how you do it. No time for beating around the bush. 👊🇺🇸 #StudentsStandUp https://t.co/50r2oHrGwc

Rubio certainly looked unnerved at times during the evening, but he did say that he supported raising the purchase age for a rifle or shotgun from 18 to 21 (something not supported by the gun lobby), was reconsidering his position on limiting the size of gun magazines, and that he did not believe arming teachers is the answer to making schools safer. I don’t believe he’s making those statements publicly right now without the #NeverAgain movement.

Then there was senior Ryan Deitsch, who asked “Why do we have to be the ones to do this? Why do we have to speak out to the Capitol?” And he’s right. As the grown-ups (of whom I am one) have failed to fix this problem, it has been unfairly left to this young generation. But what they have done, the courage and grace and intelligence that they have displayed are going to change the world. They didn’t deserve this, and perhaps we don’t deserve them—especially in the face of our own failures—but we are the luckiest to have them, and if we’re smart, we will listen and learn.

Marjory Stoneman Douglas senior Ryan Deitsch asked Florida Sen. Marco Rubio why he and other students "have to march on Washington just to save innocent lives" https://t.co/rXpL971Ypr #StudentsStandUp pic.twitter.com/s8l35SEql1

By the time Emma Gonzalez, whose incredible speech last week has made her perhaps the most prominent face of the #NeverAgain movement, got up to address Dana Loesch of the NRA, I was ready. In an endearing moment she thanked her teacher Mr. Foster for his help with that now-famous speech and then went right in on Loesch.

“I want you to know that we will support your two children in the way that…you will not.” She followed with her question, “Do you believe that it should be harder to obtain the semiautomatic and—weapons and the modifications for these weapons to make them fully automatic like bump stocks?”

You can disagree with Gonzalez, but you can never question her conviction. I think many of us look at her and wonder what the teenage versions of us would have done in the same position? I, for one, do not believe I could have handled myself so incredibly in the wake of unimaginable tragedy. These young people were nearly gunned down in their school and week ago and have more composure on a national stage than I could possibly imagine.

Student Emma Gonzalez: Do you believe it should be harder to obtain semi-automatic weapons?

NRA spokeswoman Dana Loesch: "I don't believe that this insane monster should have ever been able to obtain a firearm" https://t.co/V50uSUR7r8 #StudentsStandUp https://t.co/P5Sioleoss

The evening ended with a powerful song written by students in the school’s drama department, and I was openly weeping. But I was also more inspired to go forward and fight for my beliefs than I’ve been since the election of Donald Trump—and I really thought I was ready before. But more than that, I think we now have some new tools and methods to consider. First, we cannot dismiss young people. We do so at our own risk.

🎶 "You may have brought the dark, but together we will shine the light" 🎶

They are ready to fight for themselves and their friends—and for all of us too. And we have to start asking the hard questions directly and to the officials who are supposed to represent our interests. Force them to face us and answer without fear of access being cut off. And if they won’t face the music, vote them out. Oh, and if there aren’t town halls on important matters in your congressional districts leading up to November, make them happen.

Directness and raw emotion—those are two qualities that are often dismissed in teenagers. But it turns out that they are their greatest strength, their superpower. They can be ours too. So let’s start channeling our inner teen and get things done.