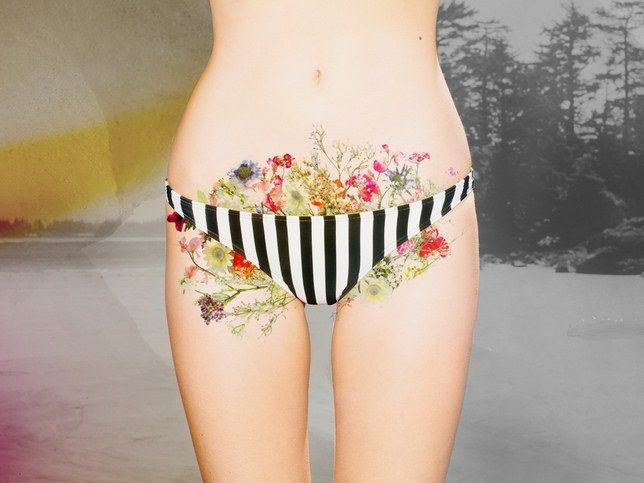 As a teen I somehow missed the memo that pubic-hair grooming was a thing. My full bush never crossed my mind when I brought hookups back to my college dorm room. Once, I told a guy who was lingering on my inner thighs to stop “beating around the bush,” and he responded, “You mean that literally, huh?” It cracked me up (wordplay is hot).

When I repeated this joke to a guy friend, he told me he also once slept with a girl with pubic hair. I paused. What did he mean “once”? Was pubic hair really that unusual?

The following summer a friend described her Brazilian wax to me in excruciating detail. I was horrified by how painful it sounded and angry that women were being expected to worry about yet another aspect of their appearance, one people barely even saw. But I got even more pissed off when she asked me how I groomed my pubes.

“They never bothered me,” I responded, emphasizing the “me.” There was no way I’d change such an intimate part of myself for someone else. But maybe I was being too judgmental. Despite the taxing process, my friend described the result as an avenue to feminist liberation. Now, she said, she felt totally comfortable naked. She’d actually left her window open and waved at a neighbor who spotted her roaming her apartment sans clothing.

Eager to discover what I was missing out on, I went to town on my pubes with a razor. It burned like hell and bled a little. When I walked, the stubs pricked and chafed my outer labia. It took all the self-control I had not to reach down and itch them. I tried again with Nair but got the same result. Not exactly liberating. As my bush grew back, my coworkers got into a discussion about pubic hair, with several guys saying they preferred it gone. “But that hurts!” I defended myself.

“Yeah, but you need to trim it at least a little or it just gets out of control,” said one female coworker. My heart sunk. A body part I’d always felt totally confident in had—just like that—been deemed unruly and undesirable by the public at large.

Scared my future partners could pass the same judgments, I tried trimming too but still found it uncomfortable. I could feel the shortened hairs poking through my underwear and at my skin. And my pubes didn’t have the fluffy feeling I used to enjoy when I ran my hands through them. Being bare just wasn’t my preference, I decided, so I threw out the Nair and didn’t look back.

Thankfully, my two subsequent boyfriends said nothing about my pubes, and my previous one’s objections remained filed firmly under His Problem. But quietly I still wondered how this was such a major issue that I seemed to be on the wrong side of. Would guys forever judge me every time they saw that I was going natural? One night I even had a freaky dream that my pubes were growing unstoppably all over my legs and stomach.

This April, when I went to a clothing-optional resort, the topic resurfaced from my subconscious. “What’s it like to be naked in front of all the other women?” a man inquired at lunch my first day. “I mean, I’m sure you’ve noticed….”

“Noticed what?” I asked. Was I literally the only woman with pubic hair? I actually hadn’t noticed—I wasn’t checking out other women’s bushes—but once I started looking, I saw he was right.

My pubes proceeded to be the first thing other guests mentioned when they saw me. One called my hair configuration a “lobster trap.” Another described my bush as “massive.” Several construed the natural appearance I’d given no thought to until recently as some sort of statement. “You seem like a hippie,” said one man.

Despite the fact that pubic hair protects your vagina from injuries, STIs, and other bacteria, I started to feel dirty and came home with newfound insecurities. “Did you ever think my bush was big?” I asked my boyfriend.

“Of course not. I love your vagina, no matter what you do with it,” he said. (Ding! Right answer.) He did, however, find the term “lobster trap” hilarious—so much so that he joked about it the next time he went down on me. Let’s just say, with everything on my mind, I didn’t take the joke so well this time. I stopped him, told him I was dealing with too many body image issues to relax, and cried into his chest.

It turns out that a lot had changed since I was a carefree 18-year-old giggling at a hookup’s “bush” pun—and most of it wasn’t my own doing. Throughout the years others had subtly shamed my pubic hair preferences until I internalized this totally sexist beauty standard.

If some women feel more comfortable without pubes, I have no interest in stopping them. But as for me, I’ll keep proudly rocking mine while remembering what my teenage self knew all along: That they’re not weird, dirty, or hippie-ish, but clean, healthy, and attractive.

Plus, they provide an excellent opportunity for wordplay.

This article is part of Summer of Sex, our 12-week long exploration of how women are having sex in 2017.